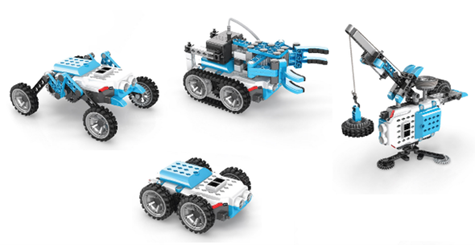 It seems that the effort to teach kids about programming and robots is ever-increasing, and it’s no wonder, given the ever-increasing role technology seems as though it will have in our kids’ futures. Unlike the generation that completely forgot to teach Home Ec. skills to its offspring, we can actively prepare our children for their future – first, by teaching them those basic survival skills after we teach them to ourselves from YouTube, and then, by exploring some of the many incredible programmable robot kits that are being produced for young people.

The GinoBot range from Engino has kits for a variety of ages, but we received the ‘Inventor Robotized Construction Set’, best for ages 9-16. Like its rivals and fellows, the GinoBot range has been designed to teach STEM thinking to kids – that is, science, technology, engineering and mathematics. Logic, methodical thinking, pattern-making and the like all fall under this bracket – aka, the skills needed for computing. I learnt these skills from a combination of a steerable robot that looked like a giant Roomba and moved at a fraction of the speed, and playing a ton of a Brøderbund game called ‘Zoombinies’. - man, that takes me back. Advanced onwards from those days, the GinoBot’s Inventor set is far more programmable than many similar contemporary learning tools, and has the added bonus of being constructable and editable, whilst also being ‘plug & play – that is, arriving ready to use as soon as it comes out of the box. This is because it has many ‘forms’ it can be transformed into, including ones that look like diggers, tanks and trucks.

So what can this robot do? Well...lots of things! That's the joy of it. It comes with an app that allows you to program its behavior, coding in movement and actions. It has a space for a pen or pencil to be inserted, meaning you can attempt to draw pictures with it, which is challenging and a lot of fun! It has programable RGB LEDs, which means you can tell it when to flash its lights on and off, and it even has inbuilt proximity sensors (meaning it will save itself from crashes, and can also be directed by walls of a maze), and colour sensors (so you can program it to respond differently to different coloured cards etc.). And it even integrates with other electronics, such as Raspberry Pi, Arduino and micro:bit, which broadens its uses.

The brilliant thing about this robot, compared to some others like it out there, is that it’s not been built with one use in mind – you have the freedom to code it towards a number of games and uses. My favourite thing about it, however, is its buildability – many companies who sell these robots sell a solid robot that’s already fully constructed and can’t be altered, with all of the focus on the movement and programming itself. However, it’s so much more stimulating for the imagination (not to mention integrating a whole other area of STEM thinking) to be able to edit, build and transform this robot into whatever vehicle takes your fancy. Let the games begin!