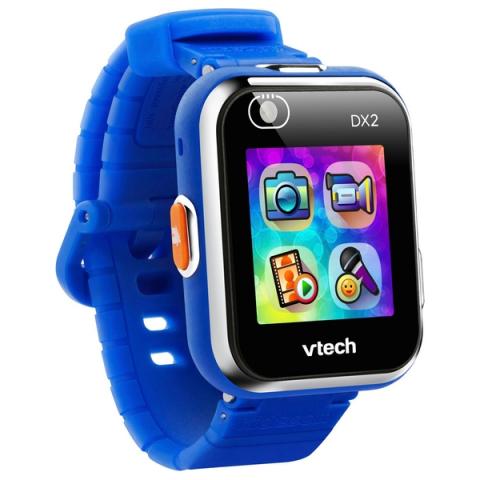 “Kids have too much technology these days!”! I see people worrying about children having access to phones and tablets from their toddling years, and granted, I didn’t get my first phone until I was 13. I had to talk my parents into even letting me have that, but looking back, I realise it couldn’t even get online – what was the big worry? These days, it’s a different story - there’s so much out there, and for all that these devices are fun and useful, they also come with a boundless access to the world that kids just don’t need yet.  If you’re caught in this dilemma, the KidiZoom Smart Watch DX2 from VTech is a fantastic solution!

These ‘Smart Watches’ from VTech are kid friendly, made with apps, functions and games that a young child can enjoy, but without any of the bits you’d choose to keep them away from. Whilst its appearance makes it look like a toy, don’t be fooled - these watches are capable of taking photos and even videos or voice recordings, providing a watch, timer, alarm clock and stopwatch, and even include a pedometer and motion tracker!

With touch-screen interfaces, they are easy for your kids to use, and also get them used to such devices, ready for adulthood in the modern age.

As well as these many handy functions, all of which mirror those found on adult smart watches, the KidiZoom DX2s also come with an augmented reality game called Monster Detector, which allows them to ‘scan’ for monsters in the real world and ‘find’ them using their watch! They can also edit the photos and videos they take with cool effects, and enjoy other small touches such as being able to customize the clock-face to a design they like. Lastly, on top of all the watch capabilities that come with the KidiZoom, the Smart Watch also comes with a Time Master app that helps kids learn how to tell the time. You can even go onto the Learning Lodge to download more apps, all of which have been designed with the KidiZoom interface in mind. These extra apps greatly expand the use you get out of your KidiZoom watches, making them a greater and greater tool and toy for your children.

These watches are splash proof, which is a must-have for anything that’s going to be on your kid’s wrist for extended periods of time. The only feature I hoped they would have that they seem to be lacking is a GPS tracker of some kind, to allow you to find your kids if they’re lost. That, and possibly an SOS button, would found these off nicely by perfectly replacing everything that I want a young kid to benefit from in having in a smart device, whilst removing all the extra bits that they don’t need yet. However, that’s not what these watches advertise, and what they DO bring to the table is both educational, useful and a lot of fun - with ever-more possibilities with every app!

We received out VTech KidiZoom Smart Watch DX2 in blue; it is also available in pink

Cons:
Would be nice to have colours other than pink or blue