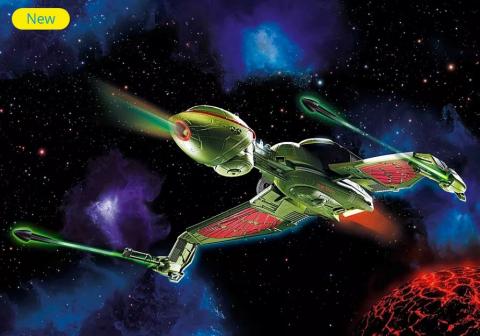 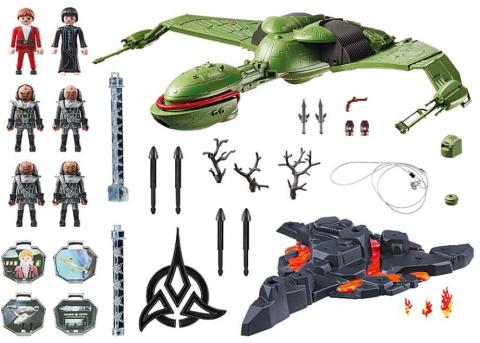 As such a beloved franchise, with fans across several generations, Star Trek is an ambitious feat for Playmobil to take on. And yet with their ever-expanding collection, they have managed to achieve the galactic magic that the fans of Star Trek love so much. This will no doubt be as much a gift for the adults as it is for the kids! After the release of the Playmobil U.S.S. Enterprise, the Klingon Bird-of-Prey is a highly anticipated addition to the Playmobil Star Trek universe. As a rugged warship used by the arch nemesis of the Klingon Empire, it is time for the Klingon’s Bird of Prey to rise from the ashes.

From the offset, Playmobil has captured the complexities and features that make the Bird-of-Prey the villainous machine that it is. This lets you let you recreate some beloved scenes as well as let your imagination run wild with the capabilities of the Defence Force. Playmobil has been able to capture the look of the Bird-of-Prey really well, whilst still maintaining the Playmobil aesthetic that everybody loves. The bridge opens up to reveal a bright red interior, with four different monitors and space for two figurines. It is small details that elevate the Klingon from a realistic model to hours of fun, as it amalgamates the retro appearance with modern capabilities, including lights and original sounds. Although this could become slightly annoying to some parents, this can quickly be forgiven for the sparks of imagination that begin to fly as their children find so much enjoyment out of the legendary villain ship.

The epic Klingon set includes Commander Kluge, as well as Maltz and Torg, and the main man himself: Captain Kirk and his trusty second in command, Mr Spock.  This lets you get hold of the whole fleet of heroes and villains. Recreation is further encouraged as the Bird-of-Prey’s wings can be moved in three different positions: take off, flying through the air, or landing on the Planet Genesis (also included in the set). The set also includes loads of really cool little accessories, such as 2 disruptor guns, 2 swords, and various-sized flames, amongst much more. The modern capabilities are also a really good bonus, as each button in the bridge has different phrases and sequences of firing, that are really authentic to the original sound, as well as different monitors displaying screens that correspond to the sounds.

Although this particular set is pricey, I would say it is definitely worth the money, as not only is the whole thing huge once you get the Bird of Prey set up, it also has loads of little features and accessories that make you seem like you are right there in the beloved franchise. It also has two different display options: a tripod and a suspension device, so you can treasure it for years to come. However, as the Bird-of-Prey and the Klingon are established nemeses to Captain Kirk, it could be overshadowed by the U.S.S. Enterprise. Therefore, it would make a great gift to anyone who looking to expand their Star Trek empire.

- Bridge can be opened and can fit two figurines.

- Offers a range of monitors and modes

- Includes a range of 6 characters.

- Also comes with lots of games and a rock formation to replicate the Planet Genesis.

- Wings have a variety of positions.

- Comes with a base or suspension to display proudly in the home.