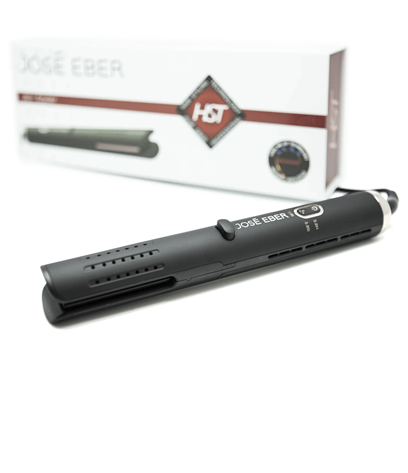 I was a pre-teen in the early 2000s, so if there was one thing I knew about, it was the importance of hair straighteners. Movement in your hair? No thanks, unless it was from braids, crimps or full-on ringlets – the last of which, we’d create with our straighteners. There was pretty much one straightener brand that everyone owned at the time – you were either one of the lucky ones who owned it, or one of the plebs who had something else. I eventually got ‘The Straightener’, though I seem to remember also owning a cheap one that had add-in crimping plates.

These days, we’re not all trying to look like Avril Lavigne, but straighteners are still essential for creating a number of hair looks, and they’re far better than they ever were ‘back in the day’. Even at a glance, the Air Styler by Jose Eber already looks better than the heavy, clunky things I used to own – it's sleek, it’s slim, it’s lightweight and it even has rose gold finishes, aka the sign that something is allowed into the upper echelons of beauty products these days. If something doesn’t have rose gold finishes, is it even a beauty product?

Putting aside my nostalgia for the days of heavy eyeliner, mousse foundation and a complete absence of contorting or highlight, what did I think of these straighteners?

As soon as you start playing around with the Air Styler, you can tell that it was made for professional-level hair styling. The feature that most sets these straighteners apart is the one they derive their name from: inside the straighteners is a mini, high-speed fan that cools your hair the moment it’s been straightened, thus setting the effect you’ve created instantly. There’s no fear that a curl will sag and then set – it sets in the shape you first created, greatly aiding its ability to retain that sweep and bounce. This isn’t just a case of a fan blowing air onto your hair from a distance – the cool air is sent along the length of the straighteners and exits through a grin around the ceramic plates, jetting the cold air directly onto the hair in question.

This feature also has a secondary bonus, and one that, as someone who has used straighteners plenty in their time, I think is fantastic and long overdue! This cool air around the edge of the ceramics means you can go as close your scalp or your ear as you like, with no fear of burning yourself. The ceramic plates may be hot, but the outer edges of your straighteners are cooled. Finally!! In hindsight, I’m amazed that 11 and 12 year olds were left playing with straighteners by ourselves on mass – they’re so easy to cause an accident with! But, with the Air Styler, there’s one risk fewer to worry about.

In fact, there’s more than one. These straighteners have an auto shut-off feature, meaning they turn themselves off if left for too long. This is an extremely important feature, as the number one concern with straightens used to be that they could cause a house fire if you left them sitting around getting hotter and hotter for too long. Again, how were we allowed them as kids?! These straighteners, in contrast, are wonderfully safe, and I’d be more than happy for my kids to use them.

These straighteners are easy and comfortable to use, with spring-loaded, easy-press plates that keep contact with the hair at every angle, and a cord end that swivels to 360 degrees, allowing for freer movement that allows you to focus on the motions needed by the hair. They were lovely to use, they’re light in your hand, and the added efficiency of their styling abilities thanks to this cool air get is really remarkable. If you want good straighteners, these might be the new go-to.