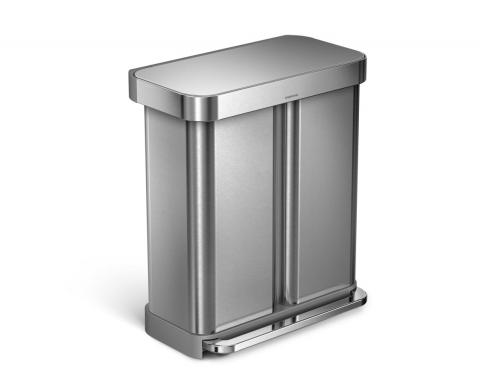 With David Attenborough doing his utmost to break our hearts with every fresh documentary, there has been a dramatic rise in plastic recycling, they have even named it the Attenborough Effect, people are more aware than ever about what they put in their bins. We have a small box to put the recycling in and a large bin for general waste however I now seem to be emptying the recycling every other day, so it is time for an upgrade. The 58 Litre Dual Compartment Recycler will save me from walking the extra 12 steps to the recycling box by housing both a recycling compartment and the general waste bin in the same unit. The bin is opened via the strong, wide pedal, unlike some bins this pedal runs all the way to the back of the bin and pivots near the centre like a see-saw, this spreads the stress across the entire steel platform which has been engineered to last over 150,000 steps, that's more than 20 steps a day for 20 years. The lid features air technology controls which means it opens quickly and shuts - when you take your foot off the pedal - in slow, smooth and silent motion. Airflow in and out of a specially designed damper allows the lid to open easily but provides resistance as the lid closes, easing it down gently and quietly, while the internal hinge prevents the lid from bumping against the wall. This bin is available Rose Gold Steel, Black Stainless Steel and the version we received, the regular Stainless Steel.

All bins are fingerprint-proof but only the brushed steel has the nano-silver clear coat that protects the steel from germs. There is a dedicated liner pocket built onto the back of the bin, meaning you can dispense a new liner from the inside of the bin after removing the old one, there is a pack of simplehuman extra-thick, double-seamed liners that are designed to fit bins without slipping and remaining hidden. The recycling compartment can be fully removed by the handle for easy emptying however I was slightly disappointed the general waste doesn’t have the same removable feature; this is simply down to my attempt to avoid adding more plastic to my rubbish by cutting out plastic bin liners altogether. If simplehuman sold the appropriate sizes of biodegradable bin liners I would be all over them but until then I will just pick up a couple of washable, reusable ones instead. The only other extra feature we would like to see is an easier option of locking the lid open, this would just come in handy now and then if you are getting rid of lots of bits all at once or fancy flinging paper balls from across the room - there is a cheeky way round this though which is by lifting the liner rim. The Dual Compartment Recycler is a good way to organise all your waste and recycling in one space, its durable construction, easy of use and sparkling design means it will fit in well in any home, and viewing your recycling every time you go to use the bin automatically prompts you to think, ‘can I recycle this?’ RRP £179.99