The Alloy Origins 60 is a mechanical gaming keyboard from gaming equipment company HyperX. The company has a range of keyboards designed specifically for gamers, but what sets the Alloy Origins 60 apart is its portability and, as hinted by its name, its smaller size.

The ‘60’ element of this keyboard’s name comes from the fact that this keyboard is only 60% of the usual size. At first, I worried that this meant buttons would be smaller or cramped, but instead, what it means is that HyperX has cut away of the keyboard’s top and sides, keeping the essential central keyboard and axing the rest in order to give gamers a wider mouse-sweeping space. I’ve seen many gamers also express a desire for a neat, minimal gaming space in order to allow them better focus and immersion, and this keyboard opens up more of that space.

To cut 40% of its size, HyperX had done away with this keyboard’s number pad, direction keys, row of F keys and all other buttons outside of the main keyboard. To access the ‘missing’ buttons, one has to press the function key, which is the same as a regular-sized keyboard, so was intuitive and easy to work out. It was certainly strange, the first few times I wanted to press the direction arrows or any of the other ‘missing’ buttons, but once I worked out how, it took no time to form new habits. The labels for the secondary functions are extremely clear and easy to read, and save space by placing these labels on the buttons’ sides, rather than having dead keyboard body space on which to write them above.

At first, I struggled to type on the keyboard simply because it was slightly different to the one I was used to, as any new keyboard is, but after no more than a couple of minutes, I was flying over it with far more speed and ease. I’m using it to type this review and it’s a far more enjoyable process.

The Alloy Origin 60 has three different height angles, which my poor wrists really appreciate. My regular keyboards, both at home and in the office, sit flat – or, more accurately, their feet do so little that I couldn’t tell they had any until I checked!

As you can tell from the images, this keyboard lights up with an ever-transitioning rainbow array of LEDs, and yes, they look just as rich in real life as the photos suggest! These lights made me feel as though I was about to do something very dramatic and significant, which is extremely apt and fun for competitive gaming – less apt, but rather thrilling none the less, for writing this review.

My only grievance with this keyboard is that the function key is only present on the righthand side (to save space, no doubt), which makes for awkward hand positioning given that most of these secondary functions also lay on the righthand side. For example, the direction arrows are right next to the function key, whereas I would prefer to press this button with my left hand whilst using them with my right. That said, this keyboard was created specifically with gaming in mind, with the other buttons simply included so that it is versatile and usable in all every-day situations. In a gaming context, I wouldn’t be using these keys – for example, for directions, I’d be pressing W, S, A & D. So, it really is a minor complaint.

As for the buttons themselves, they make a satisfying ‘clack’ sound (I believe in the keyboard enthusiast world, this is known as the keyboard’s ‘tok’?) whilst also feeling soft-press. This is thanks to the HyperX linear red switches. They respond quickly, great for both gaming and for fast typing, and unlike shallow keyboards, you’re never in any doubt that you struck the key. It really is easy to type on – rather than fighting slow keys, you’re away at speed.

The keyboard comes with an alternative design for its spacebar and escape button: the alternate escape bears the HyperX logo and the spacebar bears a swirling, psychedelic pattern that shows off the rainbow LEDs to fuller effect. I tried the spacebar both ways and found I preferred the simpler design, as the lights already speak for themselves, but the option is a very cool touch that could go well with people’s gamer setups. To take this customisation even further, using HyperX NGENUITY software, you can even create your own light profiles!

Overall, I didn’t know what to expect from this keyboard, but it’s fantastic, as well as a lot of fun to look at. I’ll be very sad if I ever have to switch back to my old keyboard! 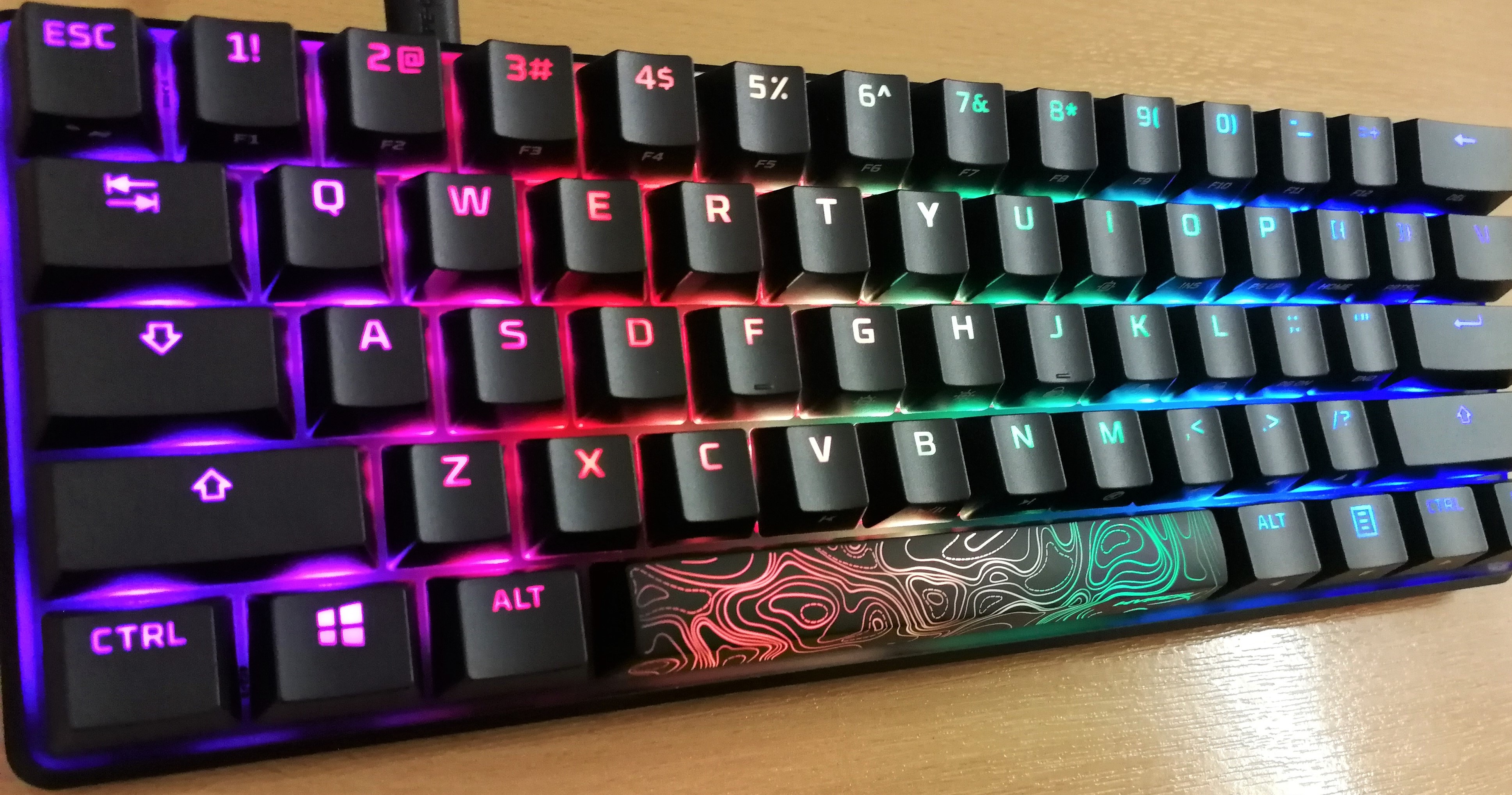