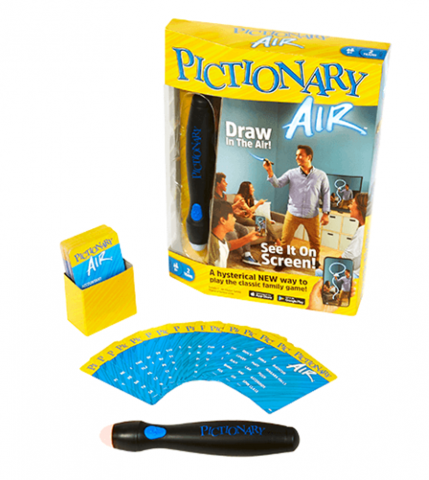 We all know Pictionary – not only is it a staple household game, but it’s one that has inspired many unofficial variations over the years, all of which have sought to find new ways to make it even less likely that you’ll have any idea what your teammates are drawing.

However, for a truly modern update to the game, it’s time to return to Mattel, and to the Pictionary brand itself. Pictionary Air has scrapped the whiteboard and instead uses an app to make sure that the illustrator has no idea what they’re drawing at all. Using the wand that comes with the game, drawers will attempt to sketch out their clues, but only the other players, using their smartphones or a TV, will see the image as it appears.

This twist is a brilliant way to use modern technology to make even bigger fools out of yourselves and your loved ones. It sounds a little fiddly, but it’s very easy to set up: you just install the Pictionary Air app on your smart phone or tablet, and point the in-app camera at the drawer to show them and the sketch they’re creating.

The app also lets you make changes such as how long you want the round time to be, or you can deactivate the timer all together in ‘Selfie Mode’ to instead record however lengthy and elaborate an illustration attempt you want.

The game is compatible with most Android and iOS devices with Android 6.0 or iOS 11.0. However, you currently can’t play on Sony Xperia or Google Pixel C, so check that your device is compatible before you purchase. To show the results on your TV, it will need to be capable of streaming, such as Apple TV or Chromecast.

This is a creative way to shake up a well-known game, and it’s definitely good for some extra giggles. However, in practical terms, organising everyone at a family game night to set up their devices, from the kids to the grandparents, might be a big ask. If you can stream to your TV, the problem might be sorted, but I'm not sure whether this game will catch on as an easy go-to for a rainy day or lazy post-Christmas Dinner games session. Still, it’s good fun and well worth a play! Maybe it’ll become a new staple in your home.

Cons
Not compatible with Sony Xperia or Google Pixel C