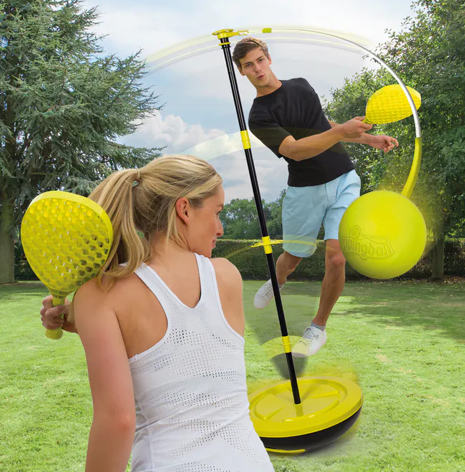 We had a Swingball set when I was a kid. It was a simple set-up – you stuck the pole in the ground and whacked the ball as hard as you could (or, with a bit more precision, if you were actually trying to play). The rackets that came with that game were pretty much the same as this set has now, but this upgrade has a few key differences that we were lacking back then. The obvious one is, of course, the wobble base.

Instead of needing to be hammered into the ground, this game’s free-standing base makes it far more easily set up or transported around. Its base’s curved design has several advantages – it can free-stand without a high risk of being knocked over, it can convert into a handy carry-case, and, even better, it means that this game is even wilder and less predictable than it was before!

My sister and I managed to send the ball flying around at great speed and at all sorts of dangerous angles back in the day, but with the new wobble base and a rotary head, the potential for chaos has been turned up to 11. That might be both a pro and a con – the product description itself calls the new amount of unpredictable movement from the ball ‘manic’, and that’s pretty accurate. Then again, it also says that this mode should be played by adults (although the product is also listed as for ages 6+).

Thankfully, this danger zone isn’t your only option – you can take your stand out of ‘Slingshot’ mode and into regular ‘Swingball’ mode, which puts down stabilising feet and allows you to play a more traditional, slightly less taxing game.

If you have kids that are hellbent on murdering each other, you might want to stick with traditional Swingball, although this upgrade may also be a great way for them to get some of their hyperactive energy out! Chaos aside, this is a brilliant upgrade for making your Swingball game easy to pack and take camping etc., and with two modes to choose from, you can embrace the new levels of mania as and when you want to (and when the kids can handle it!).

Cons:
Might be a bit too hectic for 'energetic’ kids