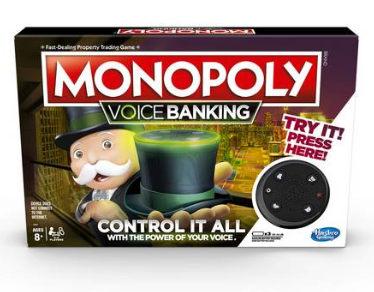 You can’t fix what isn’t broken, as was discovered by the far less successful ‘Triopoly’ that attempted to add more levels to what is already, let’s face it, a very long game. However, Monopoly Voice Banking doesn’t try to change the rules: it simply uses modern technology to give the traditional game an updated boost.

The Monopoly Voice Banking game comes with an interactive Mr. Monopoly banking unit. A giant version of the classic Monopoly top hat sits in the centre of the board; it is voice-activated, and chats to the players with the voice and attitude you might expect from Mr. Monopoly. Charming man!

This upgrade is brilliant – it keeps track of everyone’s transactions, and gives the cash-based game a new feel for the digital banking age. The voice recognition works well, and the game is now faster to set up, easier to keep track of, and you don’t have the mess of dozens of cards and piles of notes.

However, this is also a draw-back of this change. Whilst it may be easier to play without all of the fake money etc. to keep track of, you also lose the joy of stacking and hoarding it. An electronic bank also limits the ability to play with house rules or to make on-the-fly dodgy deals. These sorts of ab-libs and variations from the rulebook are part of the fun!

That said, this is a very well thought out and useful upgrade, and it comes with an aesthetic, modern revamp to the board that gives the whole thing a sci-fi look. I wouldn’t want to have this instead of a traditional Monopoly game, but it would make a fun alternative – especially if playing with younger children or other people who may get overwhelmed by all the paper and cards, or if you’re playing somewhere with limited table space.

Cons:
Limits the freedom to play with house rules
No play money to clutch!
Stops you cheating!