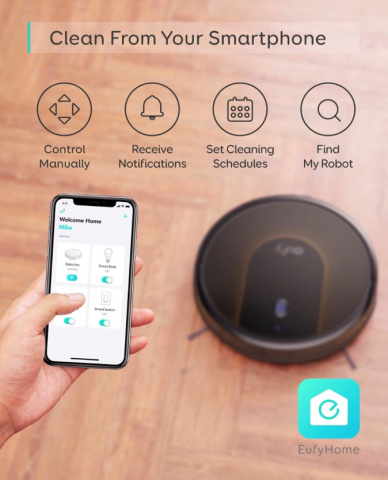 The main issue I have with my upright vacuum cleaner is its unavoidable presence. It’s big. It’s ugly. It makes far too much noise and it is such a monster to carry up and down the stairs I daren’t ask my children to use it, meanwhile the filter seems to eject more dust than a puffball mushroom. The eufy RoboVac, in contrast, is like a cute, immaculate little house elf. Unpackaging the RoboVac I didn’t believe it would have the power to keep our floors clean, compared to the hideous beast we keep under the stairs, but my doubts were unfounded, yes this had the advantage of ‘youth’, but it proved more efficient than my previous vacuums, out of the box. This is sleek but robust, efficient but quiet, it’s a vacuum I’d actually be happy to have buzzing around all day long (although the battery lasts 100 minutes, which is in fact ample!). My dogs weren’t so sure, but since they are the ones making most of the mess, they don’t have any say in the matter. Speaking of which – the suction on this little device is beyond capable of keeping our living areas fur-free, and at just 2.85 inches in height, it slipped under our sofa and chairs (and out again) with ease, navigating pretty much every area of our living room. I imagine this would be invaluable to those who struggle with domestic cleaning but who are reluctant to entrust it to someone else. Admittedly it can’t climb the stairs while you’re out but this isn’t an issue as you can leave it to vacuum upstairs while you’re out, and downstairs overnight, provided you leave the little buddy access to all areas. (Or I suppose you could buy two!) For those areas you’d rather it doesn’t venture into, the Robovac came with boundary strips, so it doesn’t stray where it might get into mischief – the top of the stairs, for instance.

The beauty of this little vacuum is the simplicity – it is controllable via Alexa or Google Assistant, but since I have neither I used the eufyHome app on my smartphone. It’s the same, intuitive app that controls other eufy devices (lighting etc.), with which, once paired with the vacuum, I could easily schedule my cleaning session. Not surprisingly, while testing this device my family were considerably more keen on vacuuming than ever before, although that may only consist of hitting a button and watching the little chap scoot in and out of nooks and crannies, I wasn’t complaining!