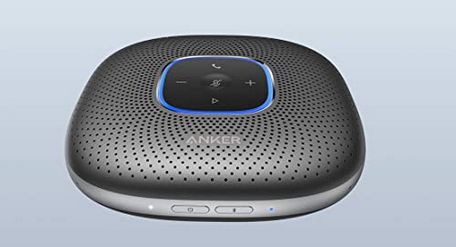 Over the years, I have used many devices to facilitate conference calls. Some worked okay while others left me straining to hear exactly what was being said thanks to significant echo or distorted sound. There is nothing more frustrating and embarrassing than asking those on the other end of the call to continually repeat themselves.

Using the Anker PowerConf Bluetooth Speakerphone made me thankful that someone was finally addressing these problematic issues that have plagued conference calling for decades.

This smart Speakerphone has 6 microphones which are arranged in order to pick up voices around a room in 360 degrees. When first using it and connecting with those at the other end, it was the initial ‘Hello’ that made me smile. It was clear, defined and there was no distortion or echo.

Even when those at the other end began to move around their room, the device managed to pick up their voices clearly no matter their distance from the phone. It was also noticed that background noise was significantly reduced. Older speakerphones would pick up the sound of someone rustling papers or muffled voices from just outside the room. Anker have developed a device that cuts out those annoying sounds, allowing you to focus solely on the conversation.

The Bluetooth setup is nice and easy too. No fiddly connection issues. It is just a case of connecting to your phone (or computer) and off you go.

It is also great to find a speakerphone that is compatible with the likes of Skype, Facetime, Zoom and other online meeting sites.

Not only does it work perfectly for conference calls, the speakerphone can also charge your phone while you talk by linking with the USB port. This is a godsend when you are worried your mobile might be about to die at a critical stage during the meeting.

Gone are the clunky, monstrous devices once used, where they would take up a significant portion of the table. The Anker PowerConf is lightweight and small, making it easy to use wherever you want to set up the call. It comes with a travel case, so that tells you just how portable this device is.

For those who do business on the go, or for those who just need a technologically superior conferencing experience, using the Anker PowerConf Speakerphone means never again having to worry about meetings full of disruption. Highly recommended.