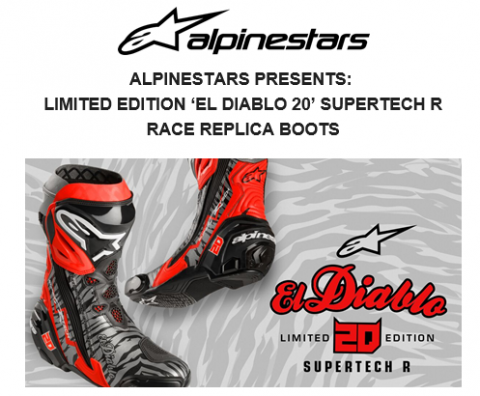 The French missile enjoyed an exhilarating debut in his inaugural MotoGP campaign, with the self-proclaimed ‘El Diablo’ securing four pole positions and finishing second four times on his way to the coveted ‘Rookie of the Year’ title. And he has continued that stunning performance this season, powering to his first premier class win at Jerez and adding further victories at the Grands Prix of Andalusia and Catalunya as he attempts to become the 2020 MotoGP champion.

The ‘El Diablo 20’ Limited Edition Supertech R is a fitting tribute to Fabio’s fast and smooth riding style. Featuring all the technical innovations of Alpinestars’ premium Supertech R boot, the striking flame design allows fans to enjoy one of the most iconic road racing boots worn by the fastest world champions past and present.

MotoGP and Superbike Technology for Alpinestars Customers
From its first launch, the Supertech boot immediately redefined the standards by which road racing footwear are measured – so revolutionary was its concept and construction. Today, the Supertech R represents the pinnacle of racing innovation for track and road use. Every component is meticulously engineered for high performance protection, precision and flexibility.  The technology used by Alpinestars athletes in MotoGP and WSBK, MotoAmerica, BSB and all other championships where Alpinestars riders compete, derives from the company’s commitment to R&D and track testing activities with top athletes, allowing customers  to enjoy the same boots for their everyday riding on the road and track.