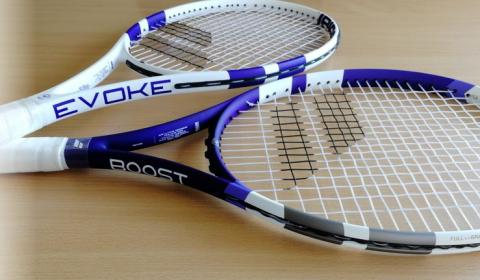 We’ve been feeling that call of the summer sun and the lifting of lockdown here in the office, all heading outside to get back to our favorite sports with renewed enthusiasm. For some of us, that means getting back on the bikes or lacing up the running shoes, and for others, it’s meant getting back to the courts.

That enthusiasm is contagious, and after a year and a half of doing things differently, some of us are also keen to try something new. We were thrilled, therefore, that Babolat sent us not just one but two tennis racquets – one for more experienced players, and one for beginners. As the newbie to the game, I grabbed myself a buddy who could show me the ropes, grabbed these racquets, and got ready to give it a go.

The racquets Babolat sent us are both from their officially licensed Wimbledon line: the Babolat Boost and the limited edition Babolat Evoke 105. With the iconic white and purple Wimbledon look, these racquets bring a bit of that Wimbledon magic wherever you play, and it’s a very cool feeling. As the beginner, I’ll start us off with the Evoke racquet, before sharing my tennis sensei's thoughts on the Boost.

In the past, I’ve found tennis intimidating, and in part that’s because I’ve been battling the racquets. Either it was the heavy wooden thing of my mum’s youth, or the ones we had at school that were so light yet rigid that you felt more like you were smacking at flies than working with the ball. Just holding the Evoke 105 was an immediate game changer, and I found that I picked up the game far quicker with this awesome piece of kit in my hand. It’s fantastically balanced, allowing you to get that whole ‘it’s an extension of your arm’ thing into your system very naturally. It’s fused graphite frame makes it light and extremely easy to maneuver, but even though it is incredibly lightweight, you still feel like you have something of note in your hand. It doesn’t vanish away, but neither does it get in your way at any point. Just holding it and giving it a swing makes you feel ready to compete, and that confidence and careful construction translated into me actually managing a decent game!

Babolat say that forgiveness and comfort were the priorities in this tennis racquet’s design. Comfort speaks for itself, and I can confirm that it was definitely comfortable to use. By ‘forgiving’, Babolat is referring to the fact that if you don’t manage to hit the ball within the racquet’s sweet spot, you can still hit it with the power and control you need to save the shot. Unforgiving racquets are, from the sounds of it, exactly what we used to play with at school, and it’s this forgiveness that makes the Evoke an excellent racquet for beginners (as well as, frankly, any player).

The Boost is also extremely forgiving, but something else that its design focuses on is power. It is this combination that separates the Boost from the Evoke – the Evoke is geared entirely towards a comfortable experience with as helpful a racquet as possible, but the Boost is ready to take things up a gear and aggressively compete. Its 100% graphite frame is comfortable and durable, like the Evoke 105, but in trying the two, this one definitely allows you to put an extra oomph behind your swings. At 260g with a 680cm² head, this racquet looks to elevate (or boost) your performance to the next level whilst still being accessible to use, and it certainly achieves its goal. My opponent was using the Boost during our game and it may have led to a bit of squealing on my part as the ball came hurtling towards my side of the court.

Whether you’re playing for fun or you have your hopes set on competing someday, these racquets help you to keep your eye on the prize, both through their performance and their iconic championships design. These racquets only ever assist you – nothing about them gets in your way. They look great, they feel great, and they’ve been thoughtfully engineered for different ability levels, giving you the support you need to have an enjoyable and competitive game. If you’re serious about tennis, they’ll take your game up a notch, and if you’ve never really given tennis a proper try, then they could be the thing you need to get you off the bench and show you that you’re not half-bad at it after all!