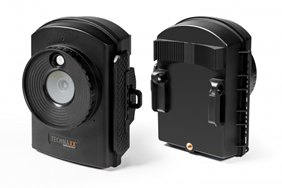 Scaffolding turning into skyscrapers, buds in bloom, the night sky turning to day – the world around us changes little by little, and watching that change in motion never ceases to be remarkable. Whilst the concept of time-lapse footage is nothing new, the spectacle is yet to stop amazing people, and I would guess that most people don’t have a suitable camera with which to capture their own.

When the first lockdown began in the UK, the wife and I took to taking a regular walk through a particular series of fields. At the time, we assumed that lockdown would only last a few weeks, but soon, the landscape around us was changing – we saw that same walk shift with the seasons until over a year had passed, and every time those fields changed, I’d take a photo, to capture the visual tale of how long the world had paused. These photos will serve as lovely prompts to memory, but how much cooler would it have been if I’d had this camera then?

The TX 164 is a full HD time lapse camera from Technaxx. The important question to address up top is, what makes a time lapse camera different from leaving a regular camera recording a video? Well, first of all, this camera is capable of capturing either time lapse videos or photographs (as well as regular videos and photographs), and even has a Stop Motion setting. For its time lapse photography, the camera can be programmed to keep taking photos at regular intervals with an adjustable length of pause in between. This pause can be set as anything from three seconds to 24 hours, and you can even set which days of the week this applies to (helpful for watching something like building construction or street crowds). If you want an even smoother transition that the three second pause, this is where you want the time lapse video option.

Finally, once you have your images or this footage, you can tell the camera how long you want your final video to be, adjustable from three seconds to two minutes. It puts the final result together for you, compressing a huge amount of visual information into one short, striking slideshow or video.

This camera has practical applications as well as artistic. Its ability to take footage over a long period of time means the TX 164 can be used for security surveillance – a use that also well utilises the programmable recording days.

The designers of this camera have thought about all of its logistical needs. For example, it can capture footage at day or night – essential in a camera that you want to leave running for days on end. At night, it boosts the visibility of the image with an inbuilt LED, with a range of 18 meters. Another essential for a camera that will be left outside is its IP56 water proofing, making it safe from the effects of rain as well as dust. The camera is also able to comfortably function in any temperature between -20°C and 50°C - aka, any temperature it should reasonably encounter!

Finally, when you buy the TX 164, you don’t just get the camera itself. You also receiving multiple ways of mounting it, so you can set it up wherever you’d like it to record from. As well as the camera itself, the box contains a mounting belt, rope, wall bracket, mounting bracket, some screws and 12 batteries – all ready to go! The one thing it doesn’t come with is a MicroSD card, so make sure you pick one up.