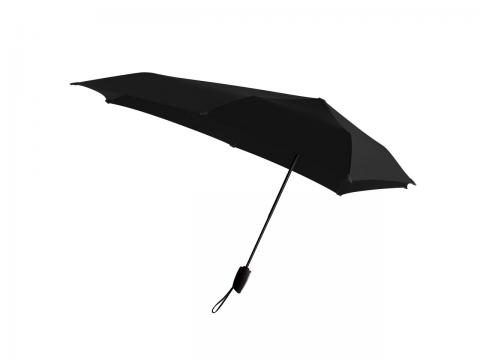 As well as that, one of the Senz Automatic’s main selling points is that it’s said to never turn inside out because of wind. After testing it by taking it out on a very windy day still to have it stay the way it’s supposed to be, I can confidently say that this umbrella is extremely unlikely to blow inside out especially on an average day.

Now, the price of this gadget will cost you around 53 GBP, which I think is a very reasonable price, considering there are many umbrellas without the simple one button opening mechanism, which are sold for an equal, often even more expensive price.

On top of the automatic feature, this Senz umbrella has another enticing feature, that being that the canopy stretches out further on one half, meaning it is able to prevent more rain from getting on you, whilst also meaning that any rain on top of the umbrella would pour off further away from your body, decreasing the chance of you getting soaked by it. RRP £55

Almost impossible to blow inside out.

Unique and practical shape of canopy.

Available in several colours and designs.

Despite the practicality of it, some may find its unique shape strange and unstylish.