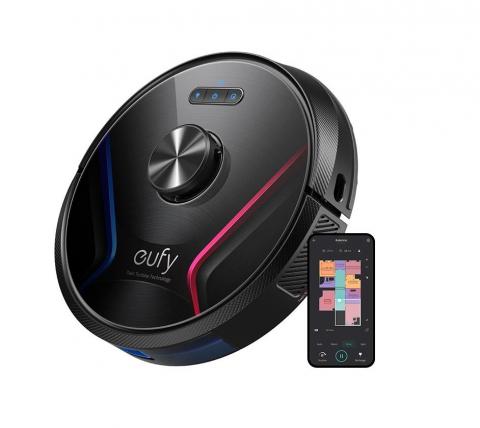 Some time ago, we received the eufy RoboVac 30C, a dinky little RoboVac that could zip around your floors, controlled from your phone. Now, we’re taking a look at eufy’s latest offering – the RoboVac X8. Bigger, kitted out and up to date, we took this home cleaner for a spin.

The most notable change that eufy have undertaken since the 30C is the power behind their RoboVacs’ suction. The X8’s suction has doubled, thanks to eufy giving it double the turbines: each of the two turbines generate up to 2000pa of suction, and this addition is extremely noticeable. The clean is far deeper and more reliable than I expected. Unlike a handheld vacuum, you aren’t there to apply extra pressure on stubborn bits of carpet, so this extra suction is important and instantly noticeable. I actually trusted the X8 to get some real cleaning done!

We have a dog and a cat, and the X8 was even able to have a good crack at vacuuming up pet hair. Admittedly, this side of things wasn’t perfect, but as any pet owner knows, truly getting down deep to get the worst of the hair is a heavy-duty task. However, for a self-running vacuum, I was amazed at how much hair it DID pull up: the carpet looked markedly better than when it began.

Speaking of self-running, I was amazed at how many details had gone into the X8 to maximise its efficiency in this regard. For example, whilst one’s mind might go to navigation when thinking about designing a product like this, one might not immediately think about the issue of emptying it out. Eufy has built the RoboVac X8 to tightly pack its dust, compressing what you suck up so tightly that it increases its volume usage by 127%. That means fewer trips to empty it, which means all the longer it can run itself and be out of your mind.

Returning to navigation, it did a brilliant job of avoiding obstacles. Given its size, I was worried about whether it would cope in my house, but it’s an extremely clever little robot – you just need to help it to orient itself in its new environment the first time (which is fair. We’ve all been the new person once). Using the app, you can select which rooms in the house you want it to clean, program in no-go zones, advise routes etc. (all using maps it generates itself with AI.Map™ 2.0 Technology), and from then on, it will remember this information. Using iPath™ Laser Navigation, it will combine what you have told it with its own observations about the obstacles around it, and it will learn the best paths through your rooms.

These devices will never quite be as efficient as a long, hard go at the carpets with a handheld vacuum using several of your nozzle head attachments, but who always has the time for that? If you don’t, this is a fantastic alternative that works far more reliably than I expected, ready to tackle pet hair and difficult bits of dirt, not just the easy dust.

Cons
Its size limits to access to some tight corners etc.