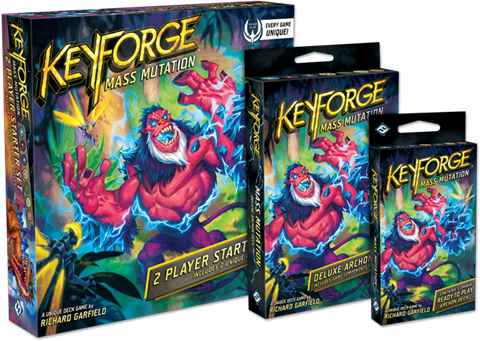 As someone who has played the Edge of Empire rpg system obsessively for many years, I get a real dopamine hit when I see the Fantasy Flight Games ‘FF’ logo. KeyForge - Mass Mutation is a two-player card game from Fantasy Flight games designed by the great Richard Garfield. Through his history with Wizards of the Coast, Garfield has had his fingers in the Dungeons & Dragons, Vampire: The Masquerade and Magic: The Gathering pies, as well a wider career working on other board games, video games and addictive card games. That fact alone got me excited to play, and I was right to be.

Mass Mutations is one of several variations on the KeyForge game that can either expand your game or serve as a stand-alone. We received the starter kit, which gives you a fully formed and balanced deck, as well as all the tokens you’ll need to play. For those who don’t know it, let’s check out KeyForge’s concept:

“Enter a world where anything is possible in KeyForge! In the center of the universe hangs the Crucible, an artificial world built from the pieces of countless planets. Two players step into the roles of mighty Archons, racing to forge keys that unlock the Crucible’s hidden Vaults.”

In essence, KeyForge is a race against other players to forge keys and unlock the vault before they do. You aren’t combatting against them in the traditional sense, but you are still competing. Another difference that stood out straight away was that cards don’t have resource costs to play. Instead, the deck is made up of different ‘houses’ that cards fall under, and at the start of the game, you declare which house you are with. From then on, you can play any card in your hand that’s from that house. This is a fun new way to add in randomisation and challenge that I really enjoyed – resource costs can feel frustrating, and this system replaces that with a rush whenever you get a card you can use.

I won’t slow you down by going into too much detail on the rules, but this game is fun, engaging, the right level of challenge, and it has some really creative cards – both in terms of their concept and the moves and actions you can make.

Mass Mutation has added 200 new cards into the pool, of which you receive a ready-to-play 36 card deck. Like all KeyForge sets, the joy of Mass Mutation is its variety – no two people will receive the same deck combination, meaning that every battle you have against your friends will be different. This ‘Unique Deck’ set-up was pioneered by KeyForge, keeping variety in the game without the usual deck-building element (which also means you don’t need to sink money into this game to enjoy it). If you want to see all 200 Mass Mutation cards, you’d better get out there and meeting other players!

The Mass Mutation concept is a lot of fun, as it provides a ‘mutated’ twist on creatures that will be familiar from previous decks. The card art quickly grew on me- its vivid colours and energetic designs looks like they should be a UV poster or painted onto the side of a van. They get me amped just looking at them, and they manage to be busy without losing their smoothness and visual appeal. I’m half tempted to collect these cards just to look at them all.

If you haven’t already dipped your toe into KeyForge yet, this is a really fun deck to do it with. Just watch out – you might become addicted!

Pros:
Creative designs
Fun, engaging game play
Every deck is different
Great addition to the KeyForge concept
Comes with all you need to play